In the various listing, during recent years Ukraine keeps the leading status of one of the most pirated countries in the world. So-called “online theft” is a very complicated issue in the modern Ukrainian society. For a long time, a considerable amount of players were satisfied with these activities. But the time starts for copyright owners, sophisticated customers, and new business relations.

Dealing with online piracy before the new law

For a long time, interested parties resolved copyright infringements typically in the court. But the development of new technologies made changes. The court was not able to provide effective, fast and cheap service. As a result, an alternative – the notice and takedown – system was created.

Originally, notice and takedown system was created in 1998 in the United States. Instead of the court filing, takedown system provides an exclusive right for the copyright owner to send the notice of copyright infringement (to block or delete content) via electronic communication to potential offender.  Although countries differ in the adoption of a version of these systems, the principle remains the same – to protect property rights (intellectual) on the internet.

Until 2017, Ukraine was behind this process. Recently adopted law introduces the national institution of copyright protection on the internet. Before the law, typically, in the case when copyright owner received information about a violation of his rights, he sent notice to website owner about the illegal activity with a request to block the content by threatening with liability. The website owner could rarely confirm the request and even sign a cooperation agreement with the obligation of constant blocking the content infringement. However, in many cases, website owner was not interested to stop the pirate activity; hence it didn’t answer properly or was denying requests to delete illegal material or signing the licensing agreement.

Despite such realities, broad list rights of the copyright owner can be protected by initiation of the civil (commercial), and (or) criminal procedure. Commercial procedure on copyright infringement on the internet was long, expensive, and low-effective for copyright owners. Nevertheless, afterward, the copyright owner could get the necessary deleting the infringement material after time-consuming court hearings, but the pirate site was able to upload new infringement content in another place on the website and such activities caused new court hearings. Also, big obstacles were receiving of contact information about the of domain name registrant, because of the Law on Personal Data Protection restrictions and insufficient evidence tools that fix and confirm the infringement. On the other hand, if copyright owner suffered damages that exceed ±$550, the criminal procedure could be started with well-known server seizing that cause stopping of business.

In contrast, in such situation, internet provider, being an important intermediate player, had blindness position during above-mentioned activities. It is caused by the Law on Telecommunications that made internet providers free from any liability for transferred content.

As a result, both options didn’t satisfy the parties and didn’t balance the rights and duties during dispute resolution of copyright infringement. The civil (commercial) procedure is not useful for copyright owners and the criminal procedure does not meet the severity of wrongdoing of website (webpage) owners.

History of only one successfully adopted law

From 2008, Ukraine made unsuccessful efforts to adopt laws on fighting with online piracy. The last effort to implement takedown system is connected with a draft of the law “On state support of movie industry in Ukraine” as a personification of prior drafts. After passing two parliament hearings, the president used his veto but fortunately the revised draft law was signed by the president the second time.

Initially, being proposed by the movie production industry, the draft of the law for the first hearing received a lot of reasonable recommendations for improvement from different representative groups, namely, Ukrainian Internet Association, Centre for Democracy and Rule of Law, Vodafone company, and others. Mainly, they were a concern with:

Fortunately, the draft for the second hearing was a solid compromise between interested parties. The draft altered the regulation of website pages that are managed by the users determined key terms more certainly, established a difference of liabilities between information providers and hosting providers, proper identification of copyright owner, and prevention of takedown misuse.

It is reasonable to say that the conception of takedown system in Ukraine was originated by its local legal grounds and analysis of foreign practices. On the one hand, being a perspective member of European Union, Ukraine has a duty to complete adaptation of the Ukrainian laws to the European Union standards. However, the European Union provides the flexibility to implement state-members’ policies on the copyright protection on the internet, including takedown policy.

It seems that Ukrainian takedown system is an example of a combination of two different approaches: standard American “notice and takedown system” with its conception “infringer is guilty upon notice” but with prevailing Canadian “notice and notice system” – “limited to the scope of information prevention”.

Unlike Ukraine, the U.S. providers are responsible for the secondary damages related to infringement content. The primary conception of implementation is based on the presumption of potential infringer’s liability: copyright infringing material is deleted and the afterward user has right to ask to restore the content. Being the compromise between internet providers and copyright owners, the law granted so-called “safe harbor” provisions for providers and notice and takedown system for copyright owners. In order to be in the “safe harbor” zone provider needs comply with several requirements.

On the other hand, Ukrainian and Canadian law regulation are similar in a matter that internet providers as intermediaries are not liable for transferred content. Canadian conception (automatic non-blocking) is based on the belief that after receiving the notice mostly users will delete infringement content voluntary. In the other case, copyright owner needs to bring the suit to court.

Canada’s approach is considered reasonable to oblige providers only forwarding notices. TheElectronic Frontier Foundation stated that such a system remains a place for proper judicial engagement and decreases abuse and misrepresentations. Recent research showed that the government goal to deter infringement was achieved: learning about infringing activity after the notice changed general user’s behavior in favor of intellectual property respect. Such a point is very important to implement in Ukrainian society. We need to build our IP respect culture.

According to the context of the law, notice and takedown system can be described as a two-level structure:

The main elements of the structure are described on the scheme.

Such a system took into account the necessity balancing the interests between copyright owners, providers, and last, but not least common users. The law will improve protection of online content, including literary works and photographs, but the takedown system will apply only to audio, audiovisual, phonograms, video recordings, television broadcasting, and computer programs.

An important novelty of Ukrainian version of takedown system is a duty to prepare the notice with an attorney that verifies the contact information and legal ground of copyright infringement. Such provision will likely limit unfair competition and misuse of the requests. 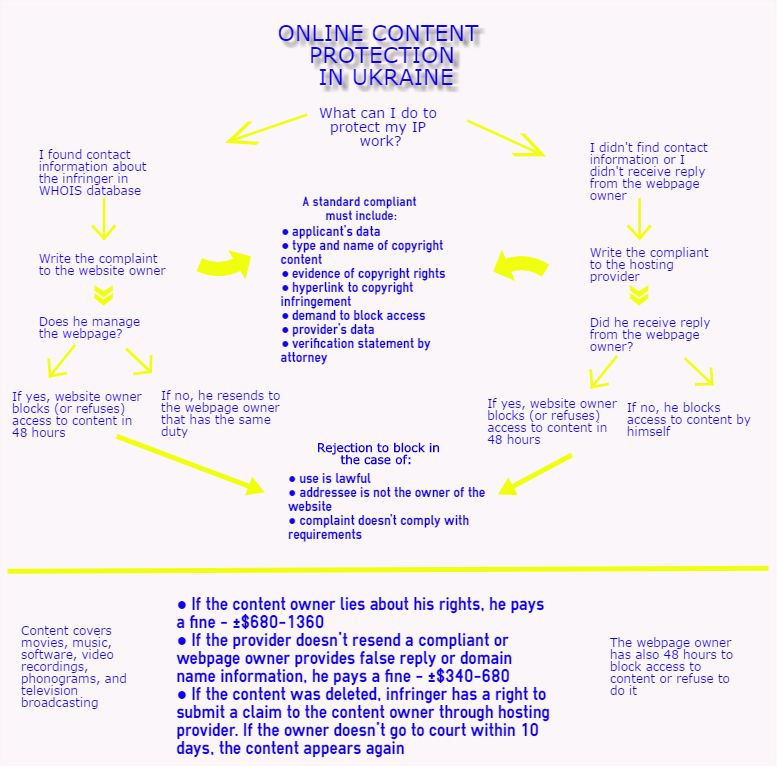 What to expect in future?

Although the law was adopted, it is reasonable to consider the possible improvement of some weak conditions of the law. It is important to enforce the administrative liability of website holders, providers, or applicants of requests in the case of violation the law. The Code on Administrative Offenses determines specific bodies that have limited authority to fix the fact of wrongdoing and doesn’t allow other kinds of investigation. In our case, such bodies are able to have problems in practice to provide evidence. Also, the above-mentioned Code encompasses its power on individuals and, therefore, players like legal entities could possibly enjoy innocence.

Leaving the law space, it is important to understand that law does not only fight piracy also creates preconditions for the development of the online content industry. For a long time, use of legal content on the internet was very limited, because pirate sites provided free access to the content. Companies on the market, namely, Megogo, Divan.tv, Netflix, etc. are not able to satisfy the demand of 45 million nation with a big variety of licensed, but affordable content. If players will not solve this issue, after blocking of pirate sites, millions of potential customers will shift to well-known past and takedown system would be useless. On the other hand, it is a big possibility that pirate website will start to comply with request policy and delete infringement content with a stronger wish.

Big players like YouTube and Google have already created automatic software that receives hundreds of millions of complaints, reduces response time, and organizes the appearance of future notices. Recently, one of the leading Ukrainian media players 1+1 also started to use software to search for illegal content and sends a request for deletion.

These examples show how law and technology can work together. New technologies often become a challenge for outdated legal regulation. Nevertheless, the cooperation between law and technology has already impacted a broad variety of areas, from electronic documentation and hearings in court, data analysis of legal documentation and providing legal opinions by software, and potentially the automatic scope of legal services without human participation. Other good examples of cooperation between law & technology can be seen in well-known state tender systems Prozorro, e-government (administrative services online), blockchain technology in the public sector, and online helper Liga.Zakon for Ukrainian lawyers.

These initiates to bring law and technology together make life easier, save tax money, and promote changes in society. As a law student in the U.S., I understood that new technology is useful for lawyers. It is time for Ukraine to make our public and private institutions better through effective teamwork of new technologies (IT sector) and law. It is time to leave the hardcore law and benefit from a hybrid law system.

Post Views: 711
Rate this
4 (4 votes)
LAST PIRATE: THE NATIONAL INSTITUTION OF COPYRIGHT PROTECTION ON THE INTERNET
4 out of 5 based on 4 user ratings

Sorry, this entry is only available in Ukrainian. Post Views: 1,069

Sorry, this entry is only available in Ukrainian. Post Views: 1,070